skip to main | skip to sidebar

I have created a new website and will continue blogging there. You can now find me here:

Ok, so it has been a long time since I posted. I will be starting up a new blog soon and will post the new link here.

In the mean time, here's the highlights:

Story to continue soon.
Posted by Joshua at 5:45 PM 1 comment:

Before you all think I am dying out here I need to make a new posting. I am happy and healthy and back on my feet, the infection passed without worry and only held me up a couple of weeks in Dakar. After I could walk again I decided to recommence my walking journey. So with Banjul as my target, another 300km away I began to trek again.

Walking is the most pure form of travel and I have learned to do it well. After 17 more days and a thousand more adventures I arrived in Banjul having walked more than 550km and crossing Northern Senegal in 27days. It is astounding the way people respond to this type of journey, and the people I have met along the way have been amazing. I have passed nights in the forest, slept with fisherman, rowed accross rivers, run from monkeys, battled entire villages, ate fantastic french food, starved, froze, melted, fallen in love, met 1000 wonderfull people and a few not so wonderfull, I walked and I walked and I walked. Truly, there are so many stories to tell from this journey that I can not even hope to put them in the blog. I will try to put a few in. For now I am in The Gambia, passing some time and trying to decide what to do next.
Posted by Joshua at 6:34 AM 7 comments:

My stay in Dakar continues. It seems I pushed myself over the line during my 10 day march from St. Louis. After arriving in Dakar and sleeping for 3 days with my stomach churning from the untreated water I had been drinking and questionable food I had eaten I hobbled around town getting things done on my weary blistered feet. During this time a nasty infection appeared on my right index finger but I was able to fight it off after inserting my knife into my cutical to release the pressure which had me in excruciating pain. At this point I thought the worst was over and I was on my way to recovery. Unfortunately this was not to be the case.

At least I can thank my right foot for waiting until my left foot was healed before beginning its decent into unhappiness. 4 days ago a painful and rapid infection erupted near the bottom of my shin like a petit volcano. I had been prepared to begin my walk to The Gambia on Thursday and unfortunately as I set off for Rufisque only 30km away the activity motivated the infection to further growth and it has now spread painfully into my foot rendering it swollen and useless. So instead of walking to The Gambia I was forced to walk directly to the doctor. I am now taking a slew of French drugs and have spent the last two days lying in my bed. I can feel the antibiotics taking hold and am certain to recover in a few days. For now, I sit and wait.
Posted by Joshua at 7:08 AM 5 comments:

After a seductive stay at Auberge Menata in Noakchott I left by car for St. Louis, Senegal. Arriving in Senegal was yet again a tremendous shift, and even the colonial architecture and pervasive tourism was not enough to block the overwhelming sensation of having truly arrived in Africa. I recognized my need for more time to adjust and not wanting to stay still in St. Louis I decided to slow down my travel even further and walk the 250km to Dakar.

I took this decision rather lightly, and did not realize what an incredible adventure I was about to begin. Though looking at a map you may suspect that this central region of Dakar would be reasonably developed and populated I found that the opposite was entirely true.

So I spent the next 10 incredible days living through a never ending array of soul wrenching experiences. In truth, the adventure soon became so astounding, I was not sure people would even believe me. After remote villages, freezing nights, forest fires, broken feet, albino children, violent tribes, beautifull villagers, dolphins, puffer fish, shooting stars, sleeping in the dirt, giant birds, goats milk, malaria, waiting for morning and a million other insane things I arrived exhausted into Dakar and have spent the past 7 days recovering both my body and my mind.

Sometime during that stretch, I looked into my little pack. Inside was 2 carrots and a coconut. My only food out here miles from anywhere. It is those kind of moments that will change you forever.
Posted by Joshua at 11:28 AM No comments: 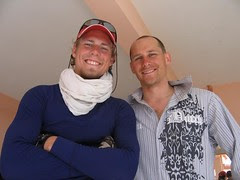 Me and Joshua
Originally uploaded by lindahl.martin.
A couple of rough looking characters during our Saharan crossing. Tired, but happy.
Posted by Joshua at 7:30 AM 2 comments:

Under the Blazing Sun 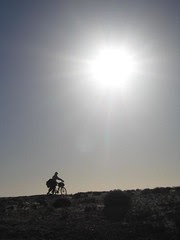 Joshua
Originally uploaded by lindahl.martin.
A photo from Martin, of me and my Bicycle under the blistering Sahara sunshine.
Posted by Joshua at 7:22 AM No comments:

After a brief stop in Nouadhiboo Martin and I hop back on our bicycles to continue the ride south through the desert, though we had not expected it, this part of the road was even more desolate than the previous stretch. 500 more kilometres to Noakchott where I am today.

The first night we camped 80km outside of Nouadhiboo and ended by pure chance on an incredible fossil bed. I spent half the next day looking for dinosaur bones before Martin finally dragged me back onto the road.

Another long day of cycling and we sleep out under the stars, waking wet and cold to the a morning dew but an incredible sunrise.

Day 3 we camp with some local bedowin in an small wooden shack they have built. The drafty roof seems like an incredible luxury after our 2 weeks spent mostly in the open desert.

On day 4, some 800 km after putting together my $50 bicycle it broke down for what would be the last time. Two spokes snapped on the back tire, turning the wheel into a figure 8 under my 40 kg of supplies and the chain derailed, jamming the pedals. I managed to bring the poor machine to a stop. The bike ride was over. So I grabbed up my pack, waved goodbye to Martin and began a long walk back to our last stop where I was able to catch a pimped up ride into Noakchott with some European electronica pounding in the car. I passed the crazy Swede (Martin) stopped and dancing on the side of the road to the tunes from his mp3 player and waved frantically as we sped on by.
Posted by Joshua at 4:23 AM 1 comment:

Any of you who may have travelled to a malarius country before will have experienced the frustrations and question marks around what to do to prevent malaria. For those of you who haven't here is a little information.

Unlike many 3rd world health problems such as yellow fever, typhoid, polio or hepatitus there is no vaccine for malaria. The disease, carried in mosquitos can only be prevented by not getting bitten or by taking one of several preventative drugs which are available to reduce the risk of aquiring the symptoms of the disease when you are infected. Unfortunately, with the list of preventative drugs also comes a long lineup of undesirable side effects. Many of which could be considered worse than actually getting malaria itself.

In Africa everyone gets malaria. Many of the locals will get it several times per year and it comes on like a strong cold or flu, some never get it, and some people die from it. Though the deaths tend to be in young children, or if no care is available. In Mauritania, where I am today, a large percentage of children (something like 20%) die from Malaria before age 5.

All travellers face this risk and must decide how they will tackle the problem. If you go to a health clinic in North America or Europe they will make the case sound pretty simple, select from one of these drugs and take it. In Canada before leaving for Asia I took a prescription of Doxycycline which is a strong antibiotic. This may be an ok solution for a 2 week trip but to take antibiotics for several months is attrocious to your body. I took my pills, one per day, for about a week and each day my stomach crunched up like I had swallowed a tin can and my mood swung into an unpleasant frustration much like if I haven't eaten in a long time. I quit the drug and though I spent 3 months in malarius zones and was bitten by many mosquitos I don't believe I had malaria. However, here in Africa the risk is much greater.

In Sweden I got a new drug, called Larium or Mefloquin. According to most countries this drug is the most effective against preventing malaria. It also has a reputation amoungst travellers which far exceeds its positive affects. This drug directly affects your psyche. Side effects listed on the package include mood swings, intense dreams, hallucinations etc. Basically it is described by travellers as a mild form of LSD, or perhaps not so mild. You take one pill per week and it builds up in your system. Last week I took my first pill to see how it would affect me, hoping that perhaps the affects would not be so strong. I took the pill on Tuesday, by Friday its effect was at its height, I was high on mefloquin and happy about it. During the previous few days I had begun to notice a few funny things, most notably that I was using my left hand for things I never use it for and that night I entered a place in my mind I have never been and woke to a dream which continued a few moments after my eyes had opened.

On Saturday I was as low as I can get, unable to lift my spirits and uncharacteristically swearing at everything. This affect lasted a few hours.

One week on Larium.

One last knock on Larium is that if you get malaria while on the drug (which can still happen) you must take a big overdose of Larium to treat the disease. From a first hand account I recieved last night this will put you on another world. Many of the other drugs have similiar treatments and effects.

So it is that each person must decide. Take a risk with the drug, or take a risk with malaria. Most long term travellers choose to carry with them some medications to take if they get malaria and forego the prevention drugs. Sticking to insect repellent as the main method of prevention. Today I should take my next Larium dose. What would you do?
Posted by Joshua at 3:52 AM 1 comment: